Did Atlantis really exist? Where and when? Was it just in someone´s imagination? A dream or a nightmare perhaps? Atlantis is the symbol of terrifying natural catastrophies, but it can also be interpreted as a sign of social and ethnic conflicts – it is just ahead of us. Humanity is continuously working on sinking itself, the apocalyptic fall of the anticipated final judgement is a bitter topicality.

Basically, Eötvös is an optimist, he never gives up hope. For him the “Artist” is a seismograph of the future who produces utopias for tomorrow. Eötvös rephrases Mussorgsky´s famous saying: “the past is with us in the present” into: “the future originates from the present.”

… We are all under water: this is the situation that Eötvös places the audience into right at the beginning of the piece. A world of fantasy-sounds surrounds us, from which the sounds approach us like far-off hallucinations… The ten string players and the ten percussionists symbolize the five twins of Poseidon and Kleitos, the first ten kings of Atlantis…
At the end of each movement, soft Transylvanian dance music can be heard from the distance, like the low, scratched recording on an old phonograph.
Is this all that remained after us? – we might well ask.

Dufourt: Down to a sunless sea and Tempesta

BMC CD Playback together with "IMA" by Eötvös

If you have any technical questions please write to:
studio(at)tomtom.hu
or call Peter Dorozsmai +36 30 900 0355
Tom‐Tom Studios 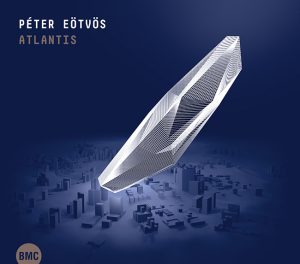