for double bass solo and string orchestra with accordion

In 1971, I was flying over Anchorage in Alaska when I saw an incredible light effect through the aeroplane window: it was the aurora borealis. I have never ever seen anything so powerful or such a blaze of colour in motion. It was not only beautiful, but also extremely powerful, almost threatening and simply monumental. In my composition Aurora, I have attempted to reproduce my own impressions of this moment when I felt myself as an element of this cosmos.

Aurora is my first piece for solo double bass. Up until now, I have always used the lower registers of this instrument and was astouned that the double bass could also soar up into the highest ranges, sounding as powerful and colorful as the aurora borealis itself. Accompanying the solo double bass in a small string orchestra and an accordion, as well as two additional orchestral double basses, which are placed in the concert hall to form a triangle with the soloist.
/Peter Eötvös/

Karajan Academy of the Berliner Philharmoniker

Soloist: in the middle
Double basses in front: 1 double bass on the right, the other on the left side 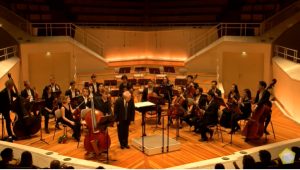