There are certain instruments – some of which have been present in an orchestral line – up for centuries – which so far have not had a chance to shine in a solo role. One such instrument is the Timpani, or kettle drum. Due to its unique tone, produced by resonance, this instrument is usually employed to provide stability and grounding, as well as suggesting danger in louder passages, and to imply space and distance in other places.

There are several reasons for this under-utilisation as a solo instrument. One of them is mechanical – early timpani were only able to play at a single pitch and although transposition was possible it was relatively complicated and took too long. The 1870s saw the evolution of the pedal timpani, which allowed the player to change pitches faster and more accurately, to within an octave.

THUNDER FOR ONE BASS TIMPANI was composed to exploit the potential of the pedal timpani. The title describes the piece thoroughly. Whilst in a symphony orchestra there can be anything from two to ten kettle drums, what is special about this piece is that just one instrument is used, and at last the Timpani has a chance to feature as a solo instrument!

Thunder is dedicated to Isao Nakamura.

Participants of the Santander Music Festival

Thunder for one bass timpani 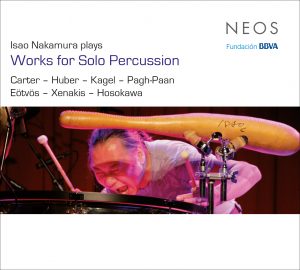