for 5 musicians and tape

The compositions Intervalles-lnterieurs (Interval interiors or Inside the intervals) and the Windsequenzen (The sequences of the wind) date from the “exploratory” period of the 70s, when my interest was centred on transferring the laws of nature into sound. I developed the electronic base material for Intervalles-lnterieurs between 1972 and 1974 (the piece Electrochronicle is a diary-like summary of this work), but I added three versions of the instrumental part between 1975 and 1981.1 started to work on The sequences of the wind in 1975, and was working on it continuously until 2002. I consider the present form of both pieces “final”.

Even in ancient times people could hear and feel the different levels of tension between different intervals. For this reason they considered some intervals permitted, and others dangerous, or even forbidden. (This way of thinking lies so close to me that I feel the best way to illustrate the tensions between the characters in my operas is by the use of intervals.) Intervalles-lnterieurs focuses on the processes taking place inside the intervals. The basic concept is in the electronic material. My aim was to construct an electronic switch which, with the help of audio modulators (a voltage control filter, or VCF, an amplitude modulator, and a ring modulator), amplifies the voltage curve between the two notes (the inner movement of the complex forms arising from the sinus or triangle/square waveforms familiar from the oscilloscope), and thus makes it audible, in the form of melody and rhythm. In a figurative sense, this is an acoustic microscope: things we cannot hear with the naked ear become audible. Much more importantly, however, every audible element of the system is automatically generated by one single unit. The parameters are identical to one another: the “melody” has the same form of movement as the “rhythm”. This principle has something in common with the techniques of serial music, but the resulting sound led down a completely different path, to a kind of profuse organic germination.

The most important act in the creation of the composition was, then, setting up, “inventing” the “interval microscope”. A sound generated by a filter produces melodies that correspond to the interval curve. The filter sweeps between the two notes of the interval (from which it was formed): in other words it shows itself in another form. The waves of two notes are summed, resulting in a third curve, and this curve is the melody: the crests are the high notes, the troughs are the low ones, etc. The technique is similar as regards rhythm: the crests are loud, the troughs soft. When the wave (the curve) repeats itself periodically, we get a smooth, recognisable rhythmic motif.

The melody and the rhythm run in parallel, because the guiding wave is the same, although the polarity of the modulators can be switched, which leads to the melody and rhythm being in opposition to one another. All this is just a simplified description of the procedure. The switching – which in this piece is raised to the level of creativity – is far more complex than this, since it also affects the positioning of the notes in space, for example.

In two years I managed to perfect the switching so that nothing needed to be reset, and the electronic organist, the Observer, only needed to concentrate on recognising the nature of the intervals: to keep the key depressed, to listen, until he “understood”. This is the basis of the electronic layer. This music is not “played” or “performed”; it is “listened to” and “monitored”.

Members from the Chicago Symphony Orchestra 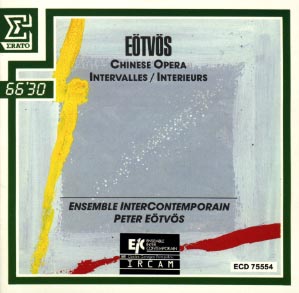 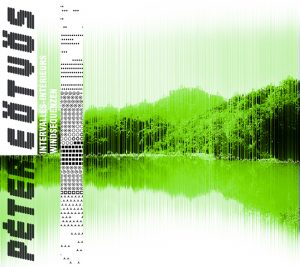