concerto for violin No. 2

After 60 years of composing, Péter Eötvös liked the idea of returning to where he began as a youngster: putting sounds above or next to each other like building blocks. DoReMi (Doh-Ray-Me) means the beginning of music, it is like 1, 2, 3 in the world of numbers, he says. “We’ve learned it from nursery rhymes and ancient melodies, and we can hear a hierarchal relationship. One of the sounds occurs more frequently and gets the main role, while the other two merely accompany it.” Being wedged between Doh and Me, Ray seems to want to escape from the pressure of the other two. If it succeeds, it gets the central position so that everything revolves around it.

“This is certainly just the starting point of my violin concerto. While a child is occupied with shaping, I am interested in misshaping. Let me demonstrate this with a simple example : when I push Re, the sound in the middle of Do-Re-Mi, with half a tone up or down, the D becomes D sharp or D flat so that it ends up closer to Do or Mi. It distances itself from one and gets closer to the other. This creates an immense tension and conflicts will emerge – just as in real life, dramatic situations can evolve.”… ” The theme of Doh-Ray-Me is the world constituted of simple things, easing the tensions, freeing from the ties. The position of the Re in the middle is extremely sensitive. Being wedged between Do and Mi, Re seems to want to escape from the pressure of the two other sounds. In the event that it succeeds, Re gets into a central position so that everything can revolve around it and finally every tune will end up with it.

“Actually, this is where my violin concerto begins. The theme of Do-Re-Mi is the world constituted of simple things, easing the tensions, freeing from the ties. The rest is to be listened to…”

Eötvös: The gliding of the eagle in the skies, DoReMi

*) as seen by the conductor 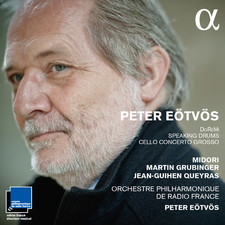