concerto for violin No. 3

My third violin concerto entitled Alhambra was commissioned by Festival Granada and is dedicated to Isabelle Faust and Pablo Heras-Casado. The piece is inspired by these two musicians and the architectural marvel of the Palace Alhambra. The intersection of Spanish and Arabic culture, exemplified by the building, has already become part of the tradition of Western art music, thanks to De Falla, Debussy and Ravel (among many others). I tried to add something from my own musical world to this wonderful tradition.

After immersing myself into the Japanese, French, German, English and American culture, and being a Hungarian, it was a wonderful opportunity for me to go on an excursion into this amazing world. The fountains of the palace, its dimension, the surrounding mountains, the amazing sunset of Andalusia – all of this became part of my piece. If I were a painter, I would have used these colors. Because of Granada, the most important note in the piece is G, a kind of gravitational center to come back to now and then during course of the piece. As I have a predilection for musical cryptograms, I transferred the letters A-L-H-A-M-B-R-A into the main melody of the piece. As the piece is also a very personal one (as all my violin concertos) I also wanted to hide the names of Isabelle and Pablo in the musical fabric. The violin is the protagonist of the piece, but she (or he) has a constant follower in the form of a mandolin tuned in scordatura. Because of the melody coming from the word “Alhambra”, the most important intervals of the violin concerto are the fifth and the tritone. The overall form is free, some sections are repeated, but it is not a rondo. It is more like a walk in the mysterious building of Alhambra.

Eötvös: Gliding of the eagle in the skies, Alhambra - violin concerto

Eötvös: Gliding of the eagle in the skies, Alhambra - violin concerto

Eötvös: Alhambra violin concerto, Gliding of the eagle in the skies 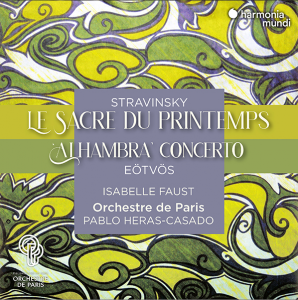