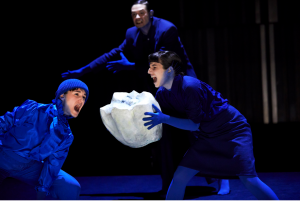 Péter Eötvös’s opera focuses on the timeless subject of illegal immigration, seems on occasionally humorous but still raises profound social questions and could be considered a comical and dramatic work. Based on Roland Schimmelpfennig’s eponymous drama, the opera tells the story of characters of different generations, all of whom live above the Asian restaurant “The Golden Dragon”. In a series of rapidly changing, stylized vignettes, five singers take on twenty-five roles while narrating the stage directions.

The protagonist is a young boy (the Little One, sung by a soprano) working without a residence permit, work permit and health insurance in The Golden Dragon as a busboy and because of his missing documents – he does not exist in the administrative system of the country -, he cannot go and see a dentist when he is suffering from toothache, thus his colleagues remove his tooth with a pipe wrench. But he bleeds to death, his body is thrown into the river and is carried to the North Sea and then further. This journey is rendered through the wonderful monologue “The trip home”. The corpse is carried on by the water and while drifting, the fish feed on his flesh. It takes two years for the skeleton to arrive in China, where it says, ” China, China. I’m there, I’m almost home now. It was a long journey. It was a very long journey. But what do I look like? No flesh left on my bones.” The shift from naive reality – from the toothache – to the point where the corpse itself speaks: “No flesh left on my bones” is a deeply impressive quality of the piece.

The tooth is a symbol of pain, helplessness and hopelessness. Only a flight attendant responds sensitively when she sees the tooth, but at the end she also throws it into the water. The many funny elements in the text appeal to the audience through their sense of humour, nevertheless the drama remains utterly profound.