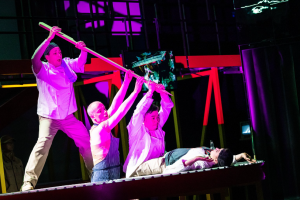 “Five Asians” work in the tiny kitchen of the Thai-China-Vietnam fast-food restaurant “The Golden Dragon”. Among them is a Chinese man who was sent to Western Europe by his family to look for his sister. He suffers from excruciating toothache. But a visit to the dentist is out of the question: the Chinese have no (valid) papers. At the same time, his sister, who also entered the country illegally, is taken in by an ant in the same house but he doesn’t know it. The story of the siblings (so close and yet so far from each other) forms the bracket for several small stories about human beings and minorities.

What sacrifices are people willing to make in order to escape the precarious living conditions of their own homeland – in the hope of better living conditions for themselves and their families? What does it mean to live in a foreign country as an “undocumented”, “illegal” person?

Peter Eötvös’ chamber opera »The Golden Dragon«, which is based on Roland Schimmelpfennig’s drama of the same name, tells of the downsides of globalization and capitalism. What complicity does our own lack of empathy and ruthless lifestyle have in the fate of the world’s “illegals.”