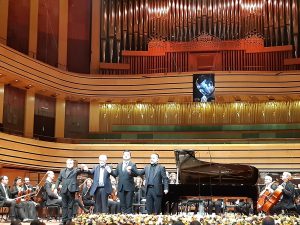 5 November 2021 marks the 100th birthday of Georges Cziffra. After Liszt, no other composer represented the Hungarian style better than him and no existing composition was difficult enough for the legendary virtuoso.

“I wrote the piano concerto on the occasion of Georges Cziffra’s 100th birthday. My family had personal connections to him and I had the opportunity to get to know him when I was still a child. Cziffra’s whole life was one of success and tragedy. It was rhapsodic and dramatic. This is precisely the atmosphere I have tried to create in my piano concerto. The characteristic, metallic rhythm heard in the first movement is reminiscent of the work in the quarry during his imprisonment. The later, meditative state of the moments of his withdrawal from the public has been composed in three quiet cadenzas. Each movement ends with a short violin solo, a personal tribute.”
/Peter Eötvös – 2021/

On 7 November, the French premiere of Cziffra Psodia has been presented in Paris at the Maison de la Radio et de la Musique. Swiss and Norwegian premieres with Orchestre de la Suisse Romande and Stavanger Symphony Orchestra are scheduled for 2022/2023.