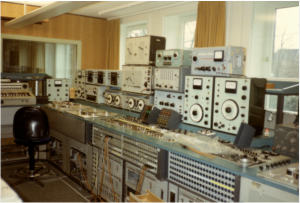 The Cologne City Council decided to expand the “zamus – Center for Early Music” together with the state of North Rhine-Westphalia and, as part of this expansion, the “Studio for Electronic Music of the WDR” permanently in Cologne set up and put into operation again. This gives Cologne a music center that is unique in Germany – and that in one of the liveliest districts of Cologne, the hotspot of the creative scene.

The Ministry of Culture and Science of the State of North Rhine-Westphalia, the City of Cologne and the West German Broadcasting Corporation (WDR) have spent the last year and a half working with the sponsoring associations, the “Studio Electronic Music” working group and the landlord of the property to jointly develop this cultural-political treasure developed a conversion and operating concept in Ehrenfeld.

The council decision is now the starting signal for a four-year expansion and development phase.

Photo: Studio for Electronic Music – It looks exactly like between 1971-1978 when Peter Eötvös worked there as a technician and composer.