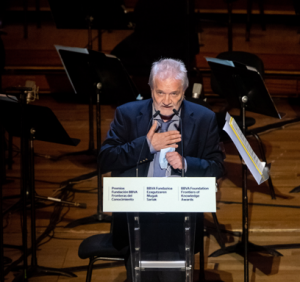 The BBVA Foundation Frontiers of Knowledge Award goes to Peter Eötvös, “one of the most important musical voices of our time” The presentation ceremony of the 12th and 13th Frontier of Knowledge Awards takes place on September 21 in the Euskalduna Conference Centre, Bilbao, Spain.

The BBVA Foundation Frontiers of Knowledge Award in the Music and Opera category has gone in this thirteenth edition to the Hungarian composer and conductor Peter Eötvös, “undoubtedly one of the most important musical voices of our time” in the words of the citation. “His artistic significance, originality and contribution to the advancement of music since the second half of the 20th century can be recognized in his writing for voice, solo instrument and orchestra in operas such as Three Sisters, Love and Other Demons and Senza Sangue. His instrumental compositions have been played by the most important ensembles and orchestras around the world.” In the above video, committee chair, Joana Carneiro, Principal Conductor of the Orquestra Sinfónica Portuguesa, reads out the award citation.

For the committee, one of Peter Eötvös’ great talents has been to overlay this emotional dimension on an existing innovative tradition that had left its audience behind. As Víctor García de Gomar, committee secretary and Artistic Director of the Gran Teatro del Liceu, explains: “The way he understands music has to do with the intensity of the communication between a composer, through a performer, and the audience that is out there. This link had become broken in the codification of 20th-century music. With Eötvös it is not just a mental or intellectual exercise, but an attempt to engage the public; what he does, crucially, is bring emotion to the story without forgoing an innovative and disruptive language.”

Peter Eötvös sees the Frontiers Award as a moment to reflect “on the life’s work that is being recognized.” The committee’s citation, he remarks in his acceptance speech, “not only highlights my activity as a composer, but also as a conductor and educator. This fact is of great importance to me, since these three facets are continuously inspiring one another, and, for me, constitute an inseparable whole.”

The Hungarian maestro is impressed that the Frontiers Awards “elevate composing and scientific research to the same level, because this view is very close to my own thinking as a composer. Composition differs from other artistic genres in that the end result remains hidden until it is converted into sound. Consider: a painter, a sculptor or a writer can see straight away how the material takes shape before their eyes; but the composer has to wait until the orchestra begins rehearsing. Only then is it revealed whether the sound and time structure resemble what he or she had imagined in their inner ear.”

Eötvös looks successively to the past, present and future in contemplating his life in music. “I view the history of music as a continuous and unbroken chain. And I see myself as one of its links. My thinking has always been determined by an awareness of the present. I am also part and parcel of the Hungarian musical tradition, stretching from Franz Liszt by way of Béla Bartók to György Ligeti and György Kurtág. And Bartók’s works in particular have shaped my musical mother tongue.”

The thread connecting today and tomorrow is never stronger than in his operas. “I draw the themes for my operas largely from the works of contemporary writers and playwrights who confront the public with the problems of today. I would like my operas to stand the test of time, so that 100 or 200 years from now they convey something of our age to the audiences of the future. Much in the way that we can still enjoy Monteverdi’s operas after 400 years, but they also shed light on the mindset of our own time.”

Coloring all of his endeavor is the desire to forge a legacy that gives continuity to tradition in the light of the present. “Music takes us precisely to the time when it was made. Although we may not know who composed it, we know the period from which it comes. I hope that my music can carry the message of the present and deliver it to the future, with all the things of the past it considers of value stowed within its luggage. And because the world changes from one moment to the next, but human feelings stay the same, there is definitely hope that the people of tomorrow will also understand this message.”

The BBVA Foundation Frontiers of Knowledge Awards recognize and reward contributions of singular impact in science, art and the humanities, privileging those that significantly expand the frontiers of the known world, open up new fields, or emerge from the interaction of various disciplinary areas.

The goal of the awards, established in 2008, is to celebrate and promote the value of knowledge as a public good without frontiers, the best instrument at our command to take on the great challenges and opportunities of our time. Their eight categories are congruent with the knowledge map of the 21st century, according a differential weight to areas of particular relevance and dynamism in recent decades such as the environment, information and communication technologies and biomedicine, alongside other areas like basic sciences, economics, social sciences, the humanities and the supremely creative realm of contemporary music and opera.