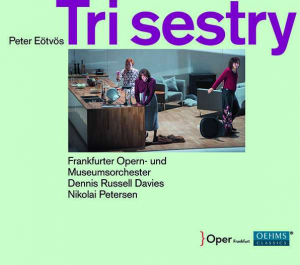 Chekhov's famous tragicomedy as an opera

"Tri Sestri" - "Three Sisters" - is one of the best-known stage works by the Russian playwright Anton Chekhov. The Hungarian composer Peter Eötvös has turned Chekhov's tragicomedy into an opera which, after its premiere in 1998, became a much-played worldwide success. Now OehmsClassics is releasing a live recording of the Frankfurt Opera. In the hands of conductor Dennis Russell Davies, Eötvös' music is in the best of hands, his singing achievements are outstanding. Once again, Frankfurt Opera is proving to be one of the most important opera venues in Germany.