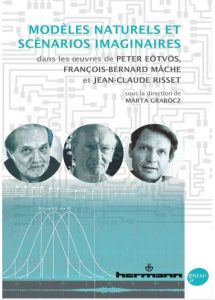 In the works of Peter Eötvös, François-Bernard Mâche and Jean-Claude Risset

Despite the obvious lack of sustained dialogue and prolonged exchanges between Peter Eötvös, François-Bernard Mâche and Jean-Claude Risset, listening more closely to their works nevertheless reveals certain musical traits that clearly link them. Part of their creation is in fact placed under the sign of the search for new tones and incredible structural frameworks. All three seem to show a penchant for extra-musical references, such as the use of natural, scientific or even literary models. They are also interested in showcasing languages ​​and human speech (sometimes using multiple languages ​​in a room, or summoning exotic or endangered languages). The "encoding" or "transposition" of the data of a text, or the intonation of a spoken text, is also found in many of their works. The last important compositional aspect that connects them is musical theater, instrumental theater or imaginary musical scenario. Jean-Claude Risset often speaks of “imaginary sound scenario” for mixed works (Du songe au son, 2008). The two types of sounds - acoustic and electronic - represent two distinct sound universes, and their confrontation, their relationships each time create a sound theatricality or a consciously elaborated musical dramaturgy.

The fifteen contributions in this book highlight these common traits or explore these innovative aspects of their musical creation.